Since 2004, Sun-X (UK) Ltd has been permitted to display the Royal Arms together with the words ‘By Appointment to Her Majesty Queen Elizabeth II’. The warrant may be awarded to companies who have regularly supplied the Queen with goods or services for at least five years. The Duke of Edinburgh and The Prince of Wales issue their own Royal Warrants. The Grantors, as they are known, are advised by the Lord Chamberlain who is head of the Royal Household and chairman of the Royal Household Tradesmen’s Warrants Committee. However, the final decision to grant a Royal Warrant is made by the member of the Royal Family concerned. They have always been regarded as a mark of excellence and quality.

The Warrant has been renewed in 2009, and again in 2014, in recognition of the continued work undertaken, and of the highest quality. 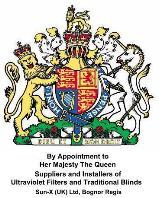