In 2003, GCHQ moved operations from its existing sites, to a purpose-designed facility in Cheltenham. The building was delivered as part of the largest Private Finance Initiative (PFI) building project undertaken (£330m).

It marked the end of a three-year construction project, which had seen the builder, Carillion, transform a giant hole in the ground into a stunning glass-clad landmark, equivalent in size to the old Wembley stadium. The radical design, known locally as the Doughnut (due to its shape), was completed earlier that year and was ready for full occupation in June 2004. The move was by no means straightforward. GCHQ houses probably the most powerful computing facility in Europe. The challenge of moving such complex systems has never before been undertaken in this country.

According to a GCHQ spokesman: "This is more than just a new building - for the first time ever, we will enjoy a working environment which has been specially designed to support our fight against global terrorism, serious crime and other threats to the UK."

One threat that was not foreseen however was that of the sun. The sheer amount of glass resulted in too much solar heat gain, raising temperatures to uncomfortable levels.

To help determine a solution, Carillion turned to a University Professor advisor, who in turn sought the advice of experts, Sun-X (UK) Ltd.

How Sun-X approached the challenge

Research and tests were undertaken to determine the best way to match the desired criteria, which was to reduce solar radiation whilst minimizing light loss and achieving a ‘g’ value of below 0.19. An internal film would not have achieved the desired effect, as the tinted interlayer to the unit would have prevented much solar energy from being reflected back through the glass.

The conclusion reached was that only an external hard-coat light silver reflective film would match these criteria. The choice of film also took into account its external appearance in minimising light reflection, as there was the added complication of the site being on a flight path! Furthermore, along the straight edges of the glazing, the film was to be sealed with a special grey powder-coated aluminium foil tape, and the circular glazing caps sealed with black silicone. Sun-X, CP Films platinum accredited installer, completed the works, covering 3,500 square meters of glass within the required timescale.

Said James Willson of Sun-X, who managed their project:

“We were very pleased to be awarded this contract. A great deal of effort went into the design stage. Sample panes of different films were installed, as were alternative edge-sealing solutions, until the appropriate combination was found. Preparing the site for our installation team required careful consideration, taking into account provision of access and the necessary Health & Safety requirements. Undertaking the final works whilst battling the spring weather was certainly arduous, but having inspected the finished project, we are delighted with the result.”

For Carillion, the completion of the Doughnut signifies a resounding success. Spokesman Colin Handy believes that it is a design classic which will earn plaudits for years to come: "It was PFI project of the Year 2002, its environmental-friendly credentials are impeccable, and we finished it ahead of time and on budget - all in all, a world class effort to ensure that this world class intelligence agency will continue to thrive in the 21st century."

To discuss the requirements of your project, get in contact with us here. 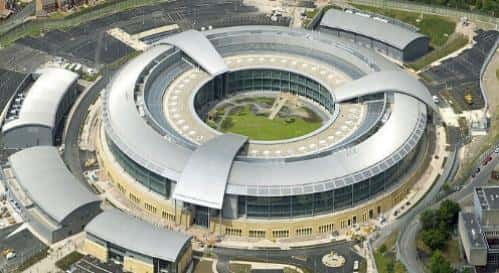